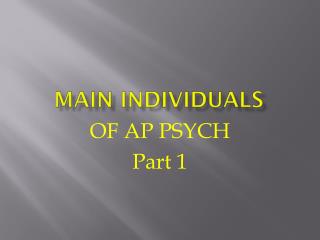 Main Individuals. OF AP PSYCH Part 1. History and Approaches. 1) Greek Philosophers. - First to speculate on the nature of the mind and the concept of dualism. 2) Rene Descartes. - The mind is not observable and not subject to natural laws Individuals - . individuals. in order to coordinate and cooperate, people need to understand each other this requires

Inspiring Individuals - . sciaf was started in 1965 by the catholic bishops of scotland with the help of three inspiring

Individuals Chart - . due to high costs (e.g., destructive testing/measurement) or a lack of data gathering opportunities

Ideal Individuals - . criteria are based on daoist attitude towards life: know the importance of contentment and

Adopted Individuals - . summary of inheritance rights. what result?. mother and father have child in 1985. mother dies in

Four individuals - The basic principles of design four ( the b-pod 4). in association with john wright &amp;

main - . labor utilization rate. some products are to be assembled using prefabricated parts. an employee usually