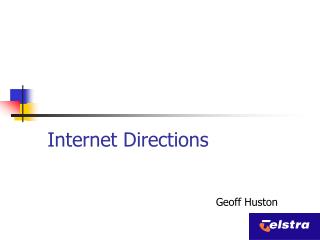 Internet Directions. Geoff Huston. Thanks to. Fred Baker of Cisco for some of the material used in this presentation. It’s a speed thing…. “Man will one day travel faster than a horse can run…” René Descartes. 3. Internet Backbone Speeds. MBPS. IP/ . OC12c. OC3c. ATM-VCs. T3 lines.

Internet of Things (IoT) Past, Present, and Future - A look at the state of the internet of things in the world today.

Internet Safety SCAVENGER HUNT - . directions. advance to the next slide to begin your scavenger hunt. click on each

Driving Directions via Mapquest - . get directions from anywhere to anywhere on your cell phone. operational concepts.