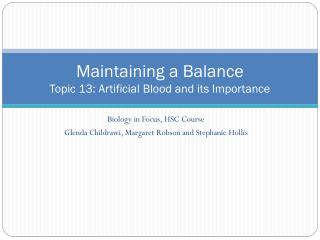 BLOOD - . hematology. the study of blood, blood forming tissues, and their disorders. functions of blood. transportation

Self-Balancing Search Trees - . chapter 11. chapter objectives. to understand the impact that balance has on the

Catalyst: (Top of page 72) What are the four main components in your blood? - . agenda catalyst quiz and melcon return

Off-Balance-Sheet Banking - . class # 9. lecture outline. purpose: to understand what is reported off of the balance