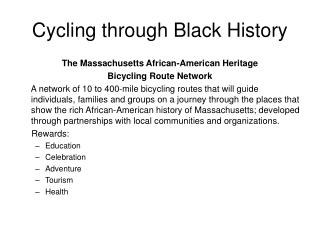 Climate Protection through Cycling - . funded by. contents. (printed edition of the issue: cycling expertise no. a-2 by

Black History - Little rock nine. black history. who are they. a group of african american students enrolled in little

Black History Week - . during black history week we have learnt about amir khan. he is a famous boxer from england and