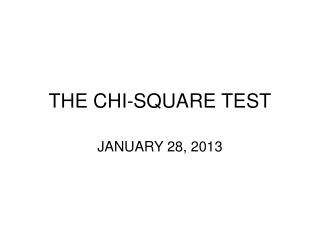 THE CHI-SQUARE TEST. JANUARY 28, 2013. A fundamental problem in genetics is determining whether the experimentally determined data fits the results expected from theory (i.e. Mendel’s laws as expressed in the Punnett square). Chi-Square Test. The Chi Square Test - . “the goodness fit” test. purpose. used in genetics to determine how close to the expected

Chi-Square test - Presentation 12. chi-square test. what does it mean for two categorical variables to be related?.

Chi-Square Test - . a fundamental problem is genetics is determining whether the experimentally determined data fits the

Chi Square Test - . gitanjali batmanabane. at the end of this session you will be able to:. prepare a contingency table

Chi-Square Test - . chi-square (χ 2 ) test. used to determine if there is a significant difference between the expected