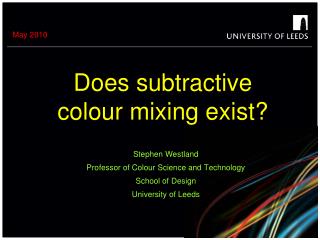 May 2010. Does subtractive colour mixing exist?. Stephen Westland Professor of Colour Science and Technology School of Design University of Leeds. All colour is created by the mixture of three "primary" colours. The three primary colours of paint are red, blue and yellow.

POINTILLISM OPTICAL COLOR MIXING - . what color is this in pointillism ?. yellow + red =. orange. who is this artist,

5.10 Color - Damian florez. 5.10 color. the way that you see colors is, when an object absorbs all colors except for one.

VIEWING THE WORLD IN COLOR - . color. a psychological interpretation based on wavelength, amplitude, and purity humans

Exam next week - . covers everything about all sensory modalities except hearing this includes: vision balance

The Colors of Light - . the various colors of the visible spectrum have slightly different wavelengths and refract by a

A baby alone does not exist. A baby can be understood only as part of a relationship. - Introduction to early childhood