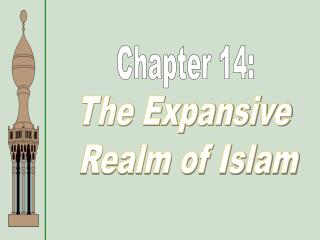 Chapter 14:. The Expansive Realm of Islam. Born 570 to merchant family in Mecca Orphaned as a child Marries wealthy widow c. 595, works as merchant Familiarity with paganism, Christianity and Judaism as practiced in Arabian peninsula. Muhammad and His Message. Visions c. 610 CE

Chapter 14 - . the archaeology of the mind. outline. what’s a symbol? the peace pipe as ritual weapon exploring ancient

Chapter 14 - Exploring management. chapter 14. teams and teamwork. chapter 14. why is it important to understand teams

Chapter 14 - . criminal justice process: the trial . right to trial by jury . 6 th amendment: guarantees the right to a

Chapter 14 - . vital concepts &amp; truths to know in john 14. there is only one way to heaven! it is through jesus,

Chapter 14 Audit of the Sales and Collection Cycle - . allison. what are the primary transactions in the sales and