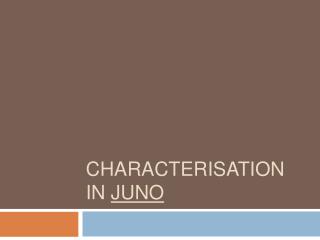 Juno - . by kaitlyn watkins . who was juno?. juno was the roman goddess of marriage and childbirth. a guardian to women

Characterisation - . objective – create a conversation between 2 objects that have ‘come to life’!. discuss as a

Characterisation: - . juror 5. experiences the prejudice of juror 10. attacked by juror 3. (feelings) dismissed by 1.

CHARACTERISATION - . role. part played by an actor/ attitude adopted i.e. the witch. the process of fully developing a

Themes/ Ideas in Juno - . which idea is communicated in this shot? name the theme, and list two visual features that

Hera(Juno) - Parentage- kronos and rhea sphere of influence- queen of the gods and goddess of marriage, women, sky and

Dear Juno - . genre: realistic fiction-an invented story that could have happened in real life. * soar ed. fly up or fly