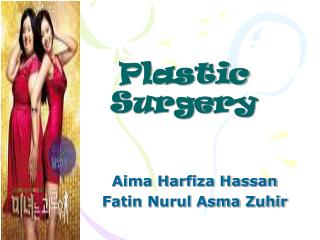 Plastic Surgery. Aima Harfiza Hassan Fatin Nurul Asma Zuhir. Definition. Plastic surgery is a medical specialty that uses a number of surgical and nonsurgical techniques to change the appearance and function of a person’s body. Hukum Haram Why? Because Change Allah’s creation.. History of surgery - . historical relationship between surgery and medicine

define a “routine surgery” - . who has had a pet through surgery? who has monitored a surgery? what are the