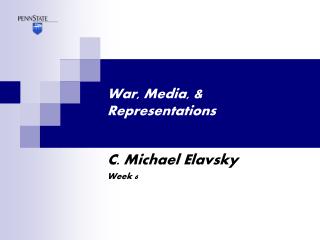 War, Media, & Representations. C. Michael Elavsky Week 6. Hi story and re presentation s. “Those who do not learn from history are doomed to repeat it” George Santayana The Life of Reason (1905). Bringing It All Back Home (1). ASKING QUESTIONS and CONNECTING THE DOTS