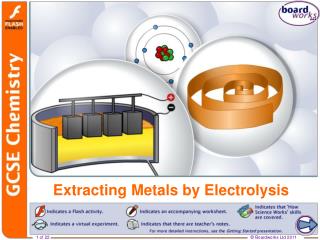 Extracting Metals by Electrolysis. Extracting metals from ores. Most metals that we use are found combined with other elements, as compounds in ores . These metals must be extracted from their ores before they can be made useful. potassium.

Relationship Between Metals and Their Discovery - . by: ghaida odah 8c.

GCSE Questions and Answers Redox Chemistry and Electrolysis. - Remember that you can search using “edit”!. consider

extraction of metals - . metals can be extracted from their ores by electrolysis. electrolysis is an expensive method and

What is electrolysis? - . an ionic compound conducts electricity when it is molten or in solution. the current causes the

Electrolysis - . senior-ii uzair altaf. introduction. electrolysis is the movement of “ cations ” towards the

Extraction of metals - . only some unreactive metals such as silver, gold and platinum can occur freely in nature. most

Ores - . principally we discuss ores as sources of metals however, there are many other resources bound in minerals which

Extraction of metals - . principles of metal extraction. most elements do not occur as separate substances but exist

Metal Extraction - . question 1. most metals are extracted from naturally occurring compounds called ores, which are

Metals - . you are going to learn why metals are so important for us and how we obtain them. metals. this time you are