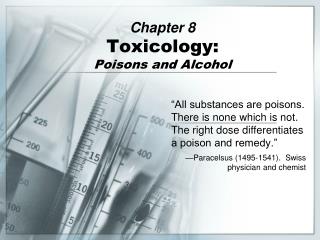 Chapter 8 Toxicology: Poisons and Alcohol. “All substances are poisons. There is none which is not. The right dose differentiates a poison and remedy.” — Paracelsus (1495-1541). Swiss physician and chemist. Toxicology and Alcohol. A quantitative approach to toxicology. Bellringer - . what makes something a poison?. toxicology and drugs. don’t do drugs. objective. learn about the