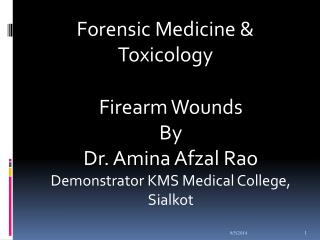 Forensics CHS McNiff - . vocabulary. crime scene: any physical location in which a crime has occurred or is suspected of

History of Forensic Science - . definition. forensic science is the application of science to criminal and civil laws.

Forensic toxicology - . part i – drugs of abuse. drug vs. poison. a drug is a natural or synthetic substance designed

Forensic Evidence and The Emergency Department - . taken from: the manual for forensic medicine: a guide for clinicians

Toxicology: Poisons and Alcohol - . lesson essential questions:. what is toxicology? how is toxicology important in

FORENSIC SCIENCE - . week 1. week one- c day. bell ringer!. what do you expect to learn in this class? what are some

History of Forensic Science - . research based on miami-dade county website. what is forensic science?. previously