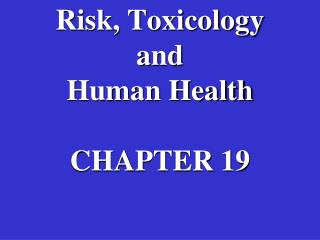 Risk, Toxicology and Human Health CHAPTER 19. Human Health. Health is a state of complete physical, mental, social and spiritual well-being and not merely the absence of disease or infirmity or The ability to lead a socially and economically productive life. Holistic Concept of Health.

Bellringer - . what makes something a poison?. toxicology and drugs. don’t do drugs. objective. learn about the

Bioterrorism Awareness: Protection of Human and Animal Health - . human health professionals. why are we here?. september