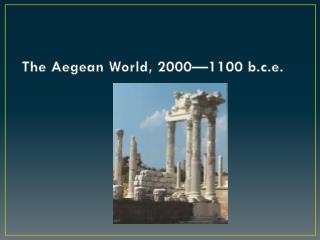 Classical Greece and It’s Aftermath - . the art of greece the periods the cretan period 2000-1400 bc the mycenaean

THE AEGEAN REGION OF TURKEY - . the aegean

Landforms - . around the world. archipelago. japan. aegean islands. a group of many islands . hawaiian islands.