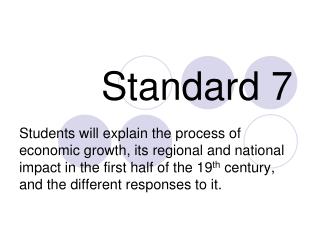 Standard 7. Students will explain the process of economic growth, its regional and national impact in the first half of the 19 th century, and the different responses to it. A. Industrial Revolution.

Standard 8.5E/Journal 12/7 - . students know how to determine that a solution is acidic, basic or

Standard 7-1: The student will demonstrate an understanding of the growth and impact of global trade on world civili

Electrochemistry Lesson 7 The Standard Hydrogen Cell - . the standard hydrogen half cell the zero point of the reduction