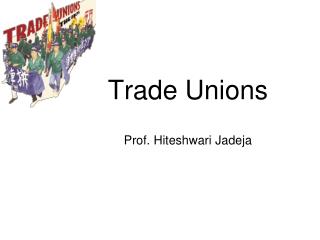 Trade Unions. Prof. Hiteshwari Jadeja. Trade union: meaning. Trade union is a formal association of workers for the purpose of protecting and promoting their rights and interests through collective bargaining and actions. HISTORY OF TRADE UNION.

Globalisation and its impact on Workers and Trade Unions - . aims of the session. to attempt to clarify the term

LIVING IN A DEMOCRACY:TRADE UNIONS - . what you will learn: the rights and responsibilities of trade unions reasons for

Trade Unions - . read the bullet points as you go through the power points. can you write something about each? no - look

Trade Unions - . meaning. trade union is an organization of workers acting collectively, who seek to protect and promote