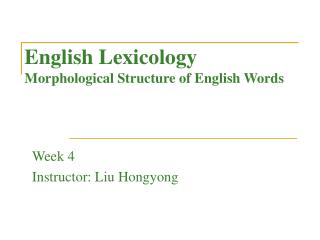 Indian Loanwords in English - . 98501045gloria. number of foreign words in use at various points in the history of

English Lexicology (IV) - . contents. 10. changes in meaning 11. american english. to be continued. vocabulary is the

Australian English Part 2 - . morphology and phonology. morphological features. diminutives: the system by where we

What percentage of English words come from Greek words? - . in a typical 80,000-word english dictionary, about 5% of the

The English Language - . origins, history, development and samples. mini - quiz. how many words in english does merriam