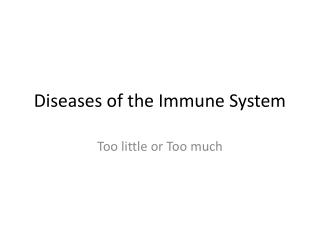 Diseases of the Immune System Diseases of the Immune System

Diseases of the cardiovascular system - . maliqin department of pathology and pathophysiology school of medicine,

IT’S THE IMMUNE SYSTEM - . boggusrl@email.uc.edu. before we begin:. share this with others. it’s the most amusing

Antigen-antibody reaction - . antigen = immunogen : any foreign substance which, when introduced will evoke a specific