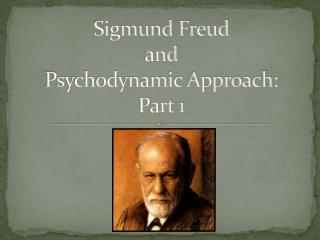 Sigmund Freud and Psychodynamic Approach: Part 1. Announcements. Concept list 6 is due on Thursday, March 17 th . Forum post 6 (Freudian Slip) is due on Friday, March 18 th by 8am. Quest 4 will be on concept list 5 and ethics and morality. Thought Question. SHOCK - . dr.raed al-asmi. to develop an understanding of the definition and pathophysiology of shock to develop an

The Morningstar Approach to Mutual Fund Analysis—Part I - . chapter 9. cycle of fear and

Freud and Psychoanalysis - . personality theory psyc 4200. why use psychoanalytic and psychodynamic models?. advantages