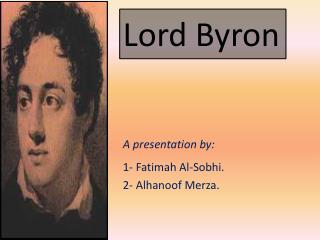 Lord Byron. A presentation by:. 1- Fatimah Al- Sobhi . 2- Alhanoof Merza. Who is Lord Byron?. George Gordon, Lord Byron, was the son of Captain John Byron, and Catherine Gordon of Gigot. He was born with a club-foot and became extreme sensitivity about his lameness. Lord Byron - “but words are things, and a small drop of ink, falling like dew upon a thought, produces that which makes

Poems by Lord Byron - . she walks in beauty when we two parted to caroline so we’ll go no more a roving. poetry or

From “Don Juan” By: Lord Byron

Lord (George Gordon) Byron 1788-1824 - . the most notorious romantic poet . byron was famous in his lifetime for his love

“Apostrophe to the Ocean” by Lord Byron - . austin martin. stanza

She Walks in Beauty By Lord Byron - . samantha adrienne rashied. she walks in