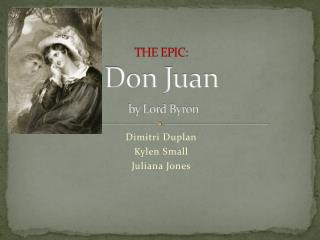 THE EPIC: Don Juan by Lord Byron. Dimitri Duplan Kylen Small Juliana Jones. Author Background . Born January 22, 1788 in London, UK A Romanticist In 1819, while in Venice, he wrote some of his famous works, including “Don Juan”.

Myths, Epic Tales, and Storytelling - . oral tradition. the sharing of stories, cultures, and ideas by word of mouth.

The Pepperdine Research Team - Bridges and barriers in the development of faith, identity, vocation, and life purpose in