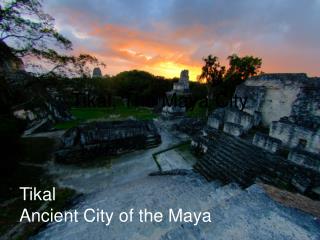 Tikal, The Maya City. Tikal Ancient City of the Maya. Introduction. The ancient Maya city of Tikal is located deep in the heart of Guatemala`s El Peten rainforest. Tikal was once the major cultural and population center of the Maya civilization

City Council Orientation - . city council mission. the mission of the city of scottsdale is to cultivate citizen trust by

Lost City of Atlantis - . nadine schaefer mrs. kresge scholar freshman english. “ we may liken the false to the true

Chichen Itza - . gabriela estrada-torres. general info. chichen itza means “at the mouth of the itza well.” it is a

Maya - . 200-900 ad. the mayan culture spread throughout southern mexico and central america . it included the yucatan