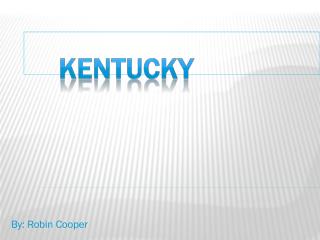 Kentucky - . by: dana b. and spencer d. nickname and region in the u.s. nickname: bluegrass state region: southeast.

Kentucky - . nolan w. the capital of kentucky is frankford. it became a state on june 1, 1792. the state bird is the

Kentucky - . mesh concept. kentucky. mesh concept in 2x2 the y and h will always “mesh” with y setting the depth at 6

Kentucky - Hi my name is skylar and i’m going to tell you about the southeast and 3 wonderful states called georgia,

KENTUCKY DERBY - . churchill downs in louisville first saturday in may . may 17, 1875. first kentucky derby was won by