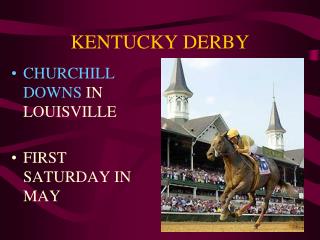 KENTUCKY DERBY. CHURCHILL DOWNS IN LOUISVILLE FIRST SATURDAY IN MAY . MAY 17, 1875. First Kentucky Derby was won by Aristides. Oliver Lewis, a black jockey won the first race. Admission to the first derby was only 50 cents. RUN FOR THE ROSES.

Sled dog derby - ... a musher rides his dog sled during a stage of the sedivackuv long dog sled race in destne v

Transitioning to the 2013 Kentucky Building Code - . approximately 926 changes to the 2006 ibc proposed and heard by