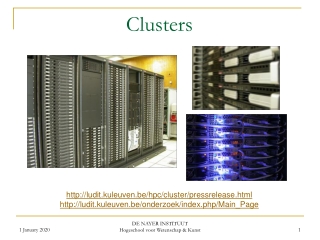 Clusters - . or: how to replace big iron with pcs. robert grimm new york university. before we dive into

Career Clusters - . place artwork and your name on this slide pick an animation scheme pick a theme or color theme be

Star Clusters - . stars are born in batches at about the same

Developing Clusters - . local schools combining for enrichment immersion. school clusters: what are they?. a group of

Career Clusters - . 16 clusters= 6 pathways organize career clusters into 6 pathways that are similar or have the same

ths/Clusters - Opportunity for post-secondary education or meaningful work experience while in ... high school, and

Enrichment Clusters - . a time to explore a personal interest through real-world , hands-on experiences that might last