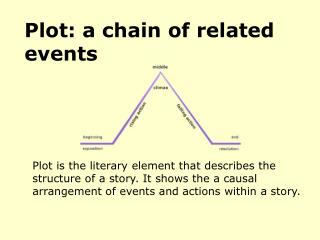 Plot: a chain of related events. Plot is the literary element that describes the structure of a story. It shows the a causal arrangement of events and actions within a story. Chronological order. Flashback. Objectives - . describe the underlying causes of wwi explain the chain of events that trigger wwi outline the chain of

CERATOPS Center for Extraction and Summarization of Events and Opinions in Text - . janyce wiebe, u. pittsburgh claire

How Do You Measure Costs Across the Supply Chain? - . gary cokins, cpim director of industry relations abc technologies,

37. FORESHADOWING - . definition: the use of clues to hint at events that will occur later in a plot. example: jaws –

Supply-Chain Management: A View of the Future - . leroy b. schwarz krannert school of management purdue university

Events - . here, we review event handling one more time. to understand how events work in java, we have to look closely

Plot - . what are plot and setting?. plot . the story’s skeleton. a series of related events growing out of one

THIS - . is. jeopardy. your. with. host. mrs. radel. jeopardy. thought questions. terms to know. vocabulary. characters.