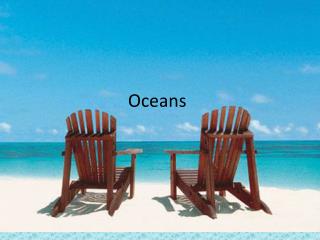 Oceans. 74% of the Earth’s surface 3.5% Salinity Major oceans are: Pacific, Atlantic, Indian, Southern, Arctic Average depth of 3790 m (12,430 ft.) Color blue because the water absorbs red photons. Most waves are caused by surface winds. How does a wave move?. ENERGY.