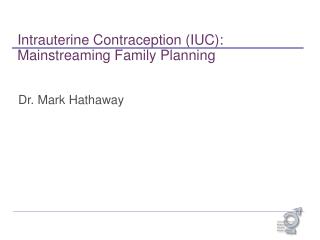 Personal Financial Management - An introduction about personal financial management for family and individual. this

Provider Education and Training to Increase Use of Intrauterine Contraception - . association of reproductive health

Study on Mainstreaming Gender in STI in East African Community”, - Equal access for education, training and

Baby Brigade Ministries: A Power Point - . part i. b c: an introduction. what are the 3 most important decisions in the