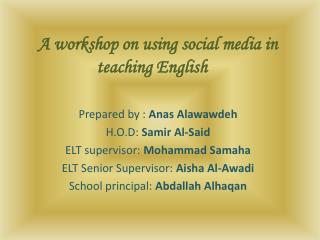 A workshop on using social media in teaching English Prepared by : Anas Alawawdeh

A workshop on using social media in teaching English Prepared by : Anas Alawawdeh

English Workshop - . overview. all pupils will follow a gcse english course during years 10 and 11. some pupils will