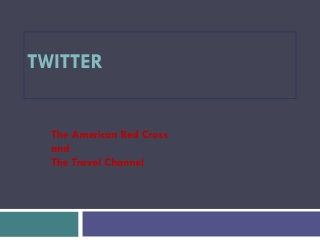 Twitter - Making the most of social media for your hospital. twitter. twitter.com. twitter.com is a unique social site

TWITTER - . social media websites are not online catalogues and cannot be measured as such. twitter as third world order:

Twitter - . presentation by sue burzynski bullard university of nebraska - lincoln. what is it?. micro-blogging site.

Twitter - . how it all started:. twitter was founded in march 2006 and was created by jack dorsey, along with evan