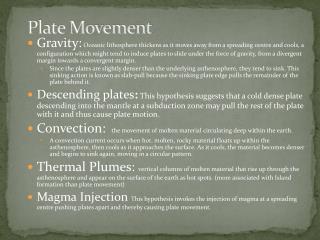 Plate Movement. Gravity: Oceanic lithosphere thickens as it moves away from a spreading centre and cools, a configuration which might tend to induce plates to slide under the force of gravity, from a divergent margin towards a convergent margin.

Continental Drift and Plate Tectonics - . all images from

PLATE TECTONICS - . chapter 17 earth science. 17.1 drifting continents. although it is difficult to imagine, the

Plate tectonics - . how the earth moves. structure of the earth. the earth is made up of 3 main layers: core (inner and

Causes of Plate Movement - . how do we know that plates move?. we know that the plates are moving because of earthquakes

Plate Tectonics - . chapter 8. what is plate tectonics?. the earth’s crust and upper mantle are broken into sections

Plate Tectonics - . how did it form to the current day earth?. earth; once upon a time.

Protection, Support, and Movement - . chapter 39. key concepts. many structures and processes have evolved in animals for