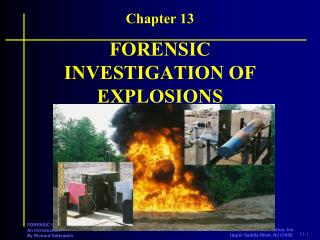 FORENSIC INVESTIGATION OF EXPLOSIONS. Chapter 13. Explosions. Definition: Explosives are substances that undergo a rapid oxidation reaction with the production of large quantities of gases. The sudden buildup of gas pressure produces the explosion. Chapter 3 PHYSICAL EVIDENCE - . physical evidence. it would be impossible to list all the objects that could conceivably

EXPLOSIONS - . arson or explosions. often an explosion starts a fire. however, the bomb specialist will investigate the

Ballistic Evidence - . ballistics. ballistics  the study of bullets and firearms firearm  a weapon, such as a gun,

PHYSICAL EVIDENCE - . chapter 3. physical evidence. it would be impossible to list all the objects that could conceivably

Motives for Arson - . arson. the willful use of fire to destroy property or cause bodily harm defraud insurance thrill