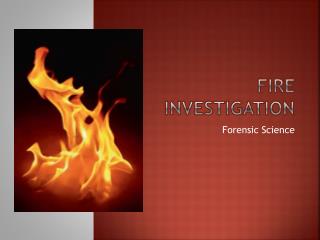 Fire Investigation. Forensic Science. A case of Arson . Read about the fire at the Happy Land Social Club What were the materials that created the fire? Why was this fire so deadly? . US Fire Data - 2011. NFPA. Interpreting Data. US Fire Data – 2011 Why are graphs used with data?

Fire and Arson Investigation Fire Patterns associated with Ignitable Liquid Accelerants - . “ one of the major

Chapter 10 Fire Prevention and Investigation - . introduction. one of the most important and least recognized jobs that