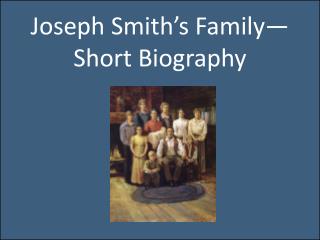 Joseph Smith’s Family—Short Biography. Joseph Smith Sr. He was born on July 12, 1771 in Essex County, Massachusetts. He was a farmer and teacher, and father of Joseph Smith Jr. He relocated from Vermont and New Hampshire and found that prosperity was elusive