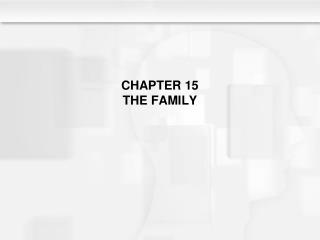 CHAPTER 15 THE FAMILY. Learning Objectives. How is the family viewed by the family systems theory? How do individual family systems change? What social trends emerged during the 20 th century and altered the makeup of the typical family and the quality of the family experience?. CHAPTER 15 THE FAMILY - . learning objectives. how is the family viewed by the family systems theory? how do

Chapter 16, The Family  - . the nature of families perspectives on the family dynamics of mate selection and

Chapter 11 – The Family - . content of chapter. case study: the myth of the traditional

Chapter 11 The Family - . test review. multiple choice (3 points) 11 questions. what is the definition of marriage?

Chapter 15 Caring for the Postpartal Woman and Her Family - . gloria nwagwu msn, fnp-bc, rn. question?. the most

CHAPTER 15 – MARRIAGE AND FAMILY STRENGTHS AND NEEDS - . instructor: wendy crapo. used by permission of the academy

Chapter 15: The Brain! - . lesson objectives: to describe the gross structure of the brain and the functions of the

Chapter 15 The Biosphere - . section 15.1 life in the earth system. the biosphere is the part of the earth where life

Chapter 15 – The Atmosphere - . atmosphere – a mixture of gases composed of 78% nitrogen and 21% oxygen. gravity

The Bureaucracy Chapter 15 - . what are examples of bureaucracy in your own life?. a large, complex organization composed

Chapter 15 The Atmosphere - . mr. manskopf notes also at http://www.manskopf.com. why care about the air?. you breathe