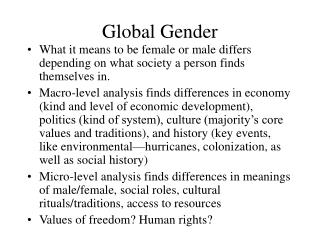 Global Gender. What it means to be female or male differs depending on what society a person finds themselves in.

GLOBAL FORUM ON GENDER STATISTICS 26-28 January 2009 Accra, Ghana - . a framework for integrating gender into the prsp

The Global Gender and Climate Alliance - . bringing women to global climate change negotiations and beyond. introduction.

Gender: Where we stand and what we are heading at - Karen sjørup associate professor, sociology roskilde university

Gender and Climate Change - . why women’s perspectives matter january 2009. outline. what is climate change why gender