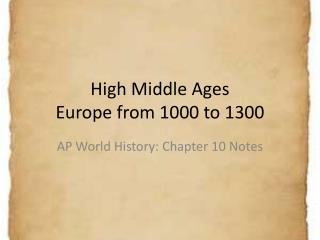 High Middle Ages Europe from 1000 to 1300. AP World History: Chapter 10 Notes. Change in Western Europe. By the year 1000 = invasions from outsiders (Vikings, Muslims, Magyars) had stopped Either stopped or were absorbed into western European society

The Late Middle Ages And the Renaissance - . the black death. loss of 1/3 of european population (mostly in cities)