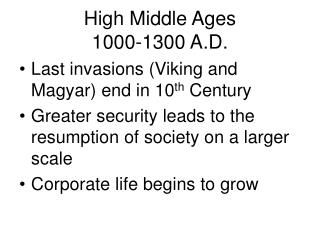 Western Europe During the High Middle Ages 1000 to 1300 - . the cathedral of notre dame de paris, whose construction

The Middle Ages A.D. 500 - . today’s aim: to understand the geography of europe and identify how new kingdoms emerged.

Middle Ages Europe 500-1300 - . what do we mean by classical period? post classical?. from rome to the middle ages. dark

High Middle Ages - . english government. qualities of a king. what do you think are the three most important qualities