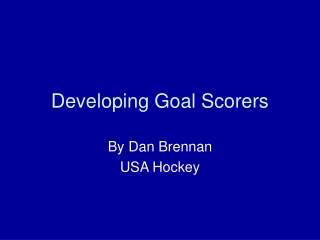 Developing Goal Scorers. By Dan Brennan USA Hockey. Introduction. Why are some players considered natural goal scorers and others not? God given talent vs. development ?

BACCARAT GAME PROTECTION Presented by Ron Buono - . baccarat. some of the standard tells you might find in other games