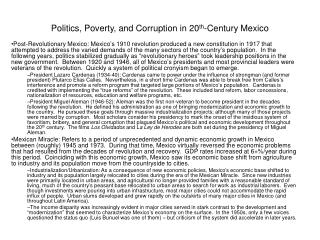 People Moving: MIGRATION - . migration. migration is any movement by humans from one locality to another. emigration

Politics, rights and accountability in the budget process - . andy norton, diane elson. source: what’s behind the

Breakdowns of Democracy - . how democracy is lost &amp; how the loss of democracy can be prevented. the global

Asian Corruption - . do we accept it as a cultural thing?. my lawyer. s m littlemore qc. corruption. corruption is akin

PRIVATIZATION &amp; CARLOS SLIM IN MEXICO - . presented by: olliesha travis. what is privatization. privatization is

The Politics of Abortion: The Work of the Politician - . a symposium to mark the 20th anniversary of r v. morgentaler dr.