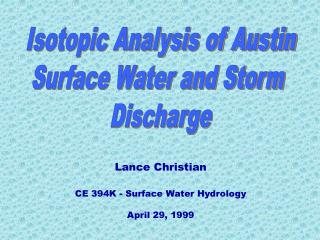 Lagrangian Analysis of Storm Runoff Water - From the maumee river into the western basin of lake erie. heidelberg

Operations of water, sewer, and storm water systems - . introduction. once a facility is installed or built, it

Surface Water - . kaitlin barton. water cycle. definition: the movement of water ,on, above, and below earth’s surface.

Drainage of Surface Water - . drainage of surface water. water which does not run in any well-defined channel . examples: