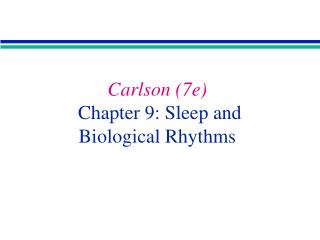 Carlson (7e) Chapter 9: Sleep and Biological Rhythms. Sleep. Sleep is a behavior and an altered state of consciousness Sleep is associated with an urge to lie down for several hours in a quiet environment Few movements occur during sleep (eye movements)

Rhythms In Nature - . outlines of the three fossil horse skeletons to be placed on exhibit at the new flmnh exhibits and

Circadian rhythms and achievement in school children: Is there a synchrony effect? - . about time of dayâ€¦.

Consciousness &amp; Sleep - . today’s goal: define the levels of consciousness and the stages of the sleep cycle.