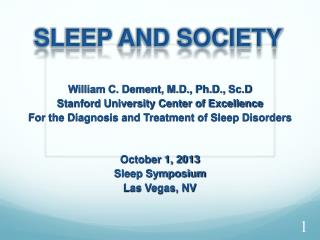 Sleep and sleep disorders - Definition. sleep is an active process. it is a reversible state of unresponsiveness to

Sleep and Sleep Disorders - . peter della bella, md november 21, 2013. true or false?. you can catch up on missed sleep

Stages of Sleep and Sleep Disorders - . what is the nature of sleep?. most people think of sleep as a state of

Adolescents and Sleep - . the circadian cycle of sleep. virtually all plants and animals (even bacteria) adjust their