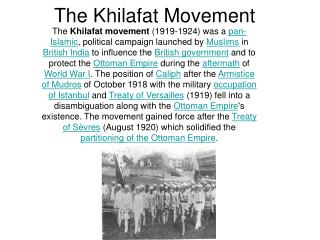 KHILAFAT MOVEMENT - . presentation by muhammad aleemuddin. introduction. since the 16 th century the turkish khalifa was

Khilafat Movement - . what is khilafat. concept : in political lexicon khilafat is the name of muslim rule in an islamic

Defining Khilafat - . what does khilafat mean?. the word khilafat means successorship. this means that the khalifa of

We Hear and We Obey Khilafat

The Movement - . in humans, the movement realizes thanks to: the skeleton or skeletal system the apparatus

The LGBT Movement - . the history of the movement from stonewall through gay marriage, gender identity and transgender

The symbolist movement - . colm humphreys. characteristics of symbolist poetry. symbolists believed that their work could

The Lyceum Movement - . chris jahoda. what is a lyceum?. the lyceum is an institution for popular education providing