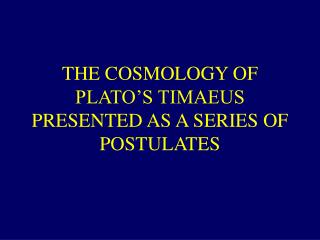 THE COSMOLOGY OF PLATO’S TIMAEUS PRESENTED AS A SERIES OF POSTULATES. GREEK CHANGES DURING PLATO’S LIFE (428-347) BCE. Education: the sophists. “Socrates called down philosophy from the skies.”. Athens became the center of intellectual life in Greece. TIMAEUS 29c. Delivering SBIRT: A “How To” on Screening, Brief Intervention, and Referral to Treatment Presented by

2.1 The Need for Ether 2.2 The Michelson-Morley Experiment 2.3 Einstein’s Postulates - Chapter 2 special theory of

Claudius Ptolemy - . saving the heavens. logic at its best. where plato and aristotle agreed was over the role of reason

String/Brane Cosmology - . cosmo 07 – university of sussex c.p. burgess. string/brane cosmology. …for those who have