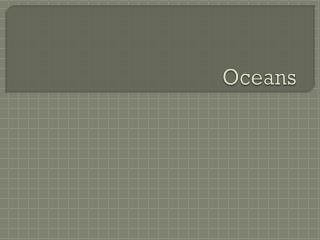 Oceans. Water Everywhere. 71% of the total surface of the earth is covered by ocean, rivers, lakes, under table and polar ice caps. Oceans cover the majority of the earth. There are 5 major oceans; the Atlantic, pacific, Indian, arctic and Antarctica ocean.

Data Mining: How to make islands of knowledge emerging out of oceans of data - . hugues bersini iridia - ulb. plan. rapid

Stoichiometry - . aka chemistry math. how many atoms are in a mole of carbon?. bell ringer. ridiculous mole facts. 3

Who Wants To Be A Millionaire on Oceans? - . 5th grade. background credit: http://www.weebay.com. your