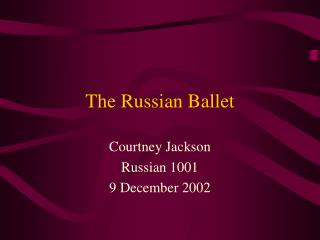 The Russian Ballet. Courtney Jackson Russian 1001 9 December 2002. Introduction. Russian ballet is filled with a unique history as well as an equally unique style. Some of the most well known ballets owe their fame to Russia. The Nutcracker Ballet - . which one do you hear?. smart chart activity. triangle score for heart chart. heart chart.