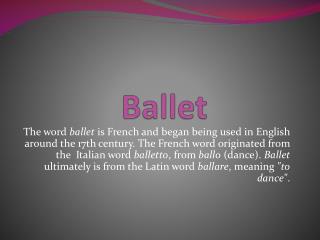 Ballet. The word ballet is French and began being used in English around the 17th century. The French word originated from the Italian word balletto , from ballo (dance). Ballet ultimately is from the Latin word ballare , meaning "to dance " . Origins.