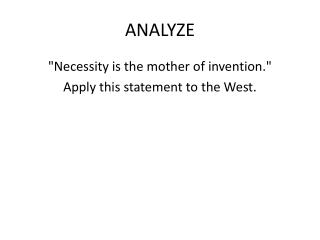 ANALYZE. "Necessity is the mother of invention." Apply this statement to the West. Cattle, the Homestead Act, & The Grange p. 5 – 6. CATTLE BECOMES BIG BUSINESS. Ranching became increasingly profitable Texas ranchers learned how to handle the Texas Longhorns from Mexican ranchers Analyze.. - Analyze. 1. what groups represent the populist’s party 2. what is this balloon made of and what does this

ANALYZE - Silently, look at the image and list anything that stands out to you. “visit of the ku-klux” by frank

Analyze - . (v.) to examine critically. how do i analyze a text?. finding evidence : textual evidence is support that you

Analyze - . take apart look at closely look at from all angles. compare/contrast. explain how two things are the same or

analyze - . break it down into parts. tell about the parts. evaluate. tell the good and the bad judge it. describe. tell

ANALYZE - Analyze the similarities and differences in political structures, cultural practices and interactions of

Analyze - . business + needs = strategies. messages you want to communicate. communication tools “what we will use to

Analyze Units - . 7.3. pre-algebra. learn to use one or more conversion factors to solve rate problems. vocabulary.

Analyze This! - . marketing-information management lap 8. explain the reasons for conducting a swot analysis.

Analyze This - Why do we need this job? what mental and physical tasks are required?. what qualifications will this

analyze= investigate - Today we will analyze the meaning of complex words using our knowledge of prefixes and base words.

Analyze the prompt - . what information are you given about the two poems? when were they written and why were they